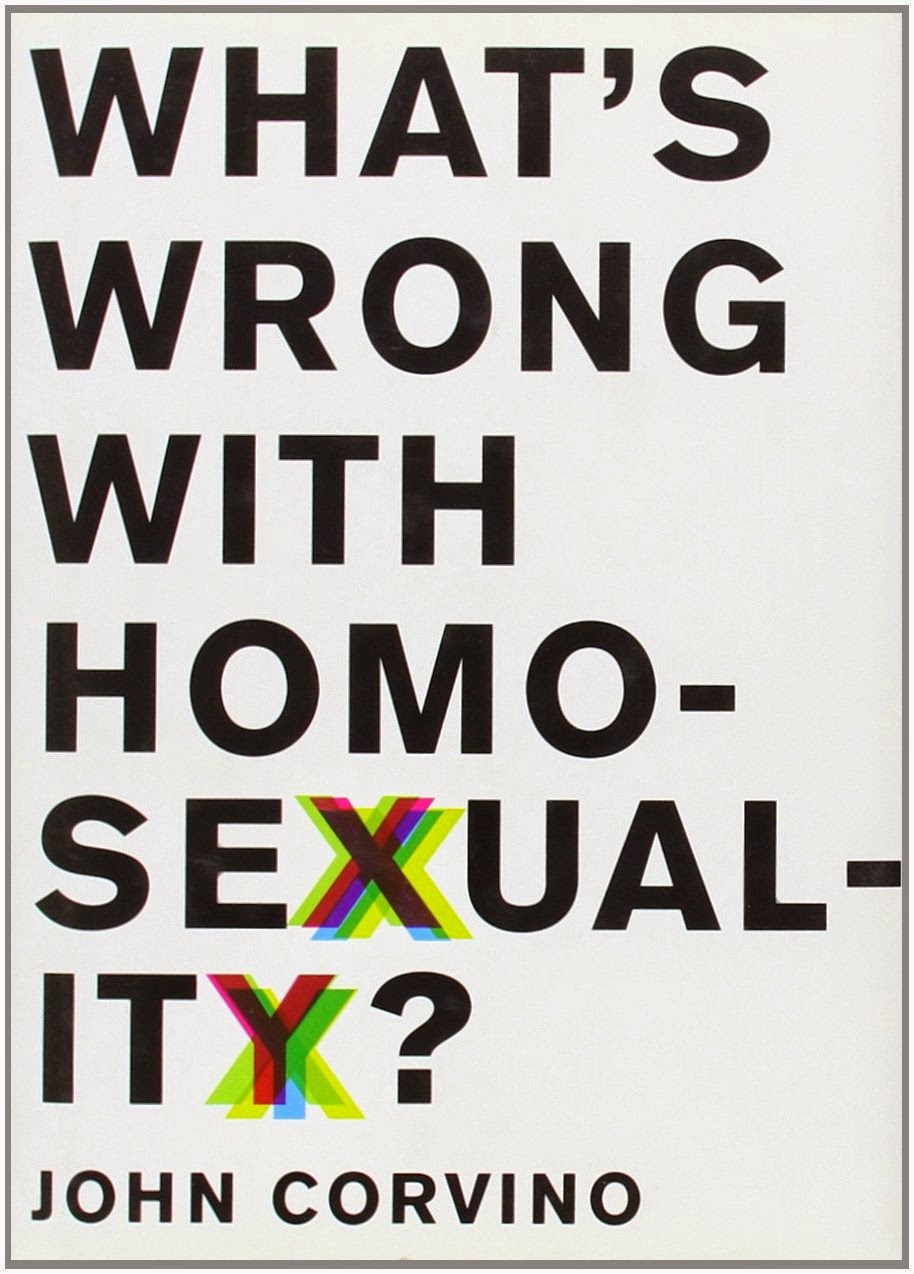 What's Wrong With Homosexuality? by John Corvino is a compilation of seven essays the author has written to debate this point. Corvino has debated his side at over two hundred universities, facing off against those whose aim is to win the argument that there is something somehow wrong with homosexuality. I enjoyed this collection, wherein Corvino named the chapters after the various arguments he has had to face. Chapter titles such as "It's Not Natural", "A Risky Lifestyle" and "Born This Way" are familiar to gays and lesbians and their advocates. I tend not to read books such as this, although the brevity (170 pages) and chapter titles drew my attention.

With a book this short, covering seven different arguments, there was no time to delay. Corvino got to the crux of each matter immediately and stated the dirty reasons why homophobes seem to get their knickers in a twist. In the chapter entitled "God Said It, I Believe It, That Settles it":

"My point is this: If you adopt a simplistic 'God said it' approach to the [Biblical] text, then be prepared to swallow some pretty nasty conclusions about slavery, women, and so on. If, instead, you insist on sensitivity to historical and cultural context, then the homosexuality passages must be reexamined in that light. Loving, mutual, nonidolatrous same-sex unions are simply not on the Biblical authors' radar, much less the target of these texts."

It always amazes me that homophobes who spout Biblical passages against gays are usually ignorant of the passages the Bible says about their own lives. Selective prejudice, where one picks verses that supposedly condemn gays while ignoring other verses that affect the bigots themselves (if the bigots are even aware of other Biblical verses) always applies to others and never to oneself:


"The fact that many people approvingly cite natural law theory to condemn homosexuality while ignoring its other conclusions says a great deal about people's capacity to tolerate inconsistency in the service of prejudice. Like Aquinas, the NNL [New Natural Law] theorists label masturbation, contraception, and non-coital heterosexual sex unnatural for the very same reasons that they label homosexual sex unnatural: the failure to achieve a reproductive-type union. They even condemn non-coital sex for heterosexuals unable to achieve coitus (say, because of injury). I suppose one can give them credit for consistency even while blanching at their coldness.
"For the rest of us, it often seems that an act is unnatural when the person making the claim finds it abhorrent or revolting."

In the chapter entitled "Man on Man, Man on Dog, or Whatever the Case May Be", Corvino writes about the unfortunate tendency of others opposed to homosexuality to lump polygamy, incest and bestiality all in the same group. He addresses what he calls the PIB argument, and states right upfront: why are they even connected? What could possibly be the connection that links my consensual relationship with my long-term boyfriend Mark with the most disgusting sexual practices listed above? The answer is that homophobes find our sexual relations "yucky", and everything else they consider yucky gets lumped in with it.

Even if there was a connection between homosexuality and polygamy, it seems highly unlikely that the religious fundamentalists (for it is usually splinter sects who are the most prominent in the practice of polygamy) would even want to be associated with the gay movement.

"I conclude that the best response to the logical version of the PIB argument remains the simple one we started with: What does one thing have to do with the other?"


One reason that is sometimes given to deny gay marriage is "if we allow same-sex couples to marry, gay males' sexual infidelity will bleed into the general population". I cannot see how these can be connected. Will straight married men suddenly decide to cheat on their wives when they see gay men cheat on their husbands? Do straight married people need married gays to give them licence to cheat? Straights need no further encouragement to be unfaithful. I have always liked the saying that if you want to preserve heterosexual marriage, then don't ban gay marriage: ban heterosexual divorce:

"Divorce is another analogy worth mentioning at least briefly. According to the Bible, Jesus himself said that 'Whoever divorces his wife and marries another commits adultery against her; and if she divorces her husband and marries another, she commits adultery' (Mark 10:11-12). Adultery is a violation of the Ten Commandments, punishable by death in the Old Testament. Yet fundamentalists take a rather different attitude toward, say, the thrice married Newt Gingrich or the four-times married Rush Limbaugh than they do towards gays and lesbians--even though all of the above are unrepentant sinners according to traditional interpretations. (It's not enough to simply 'regret' the divorce: the Bible makes it clear that continuing with your current spouse makes you a persistent adulterer.) What this disparity suggests is that people are willing to subject the gay and lesbian minority to a rather different standard of Biblical literalism than they themselves would tolerate."

What's Wrong With Homosexuality? might not be read by those who believe the answer to the title's question is "Everything!", but it will provide those who are affected most by bigots' venom with succinct answers with Biblical, logical and ethical backing.


Find this book in the Mississauga Library System's on-line catalogue
Posted by Craig Rowland at 11:41 AM No comments:

Branded by the Pink Triangle 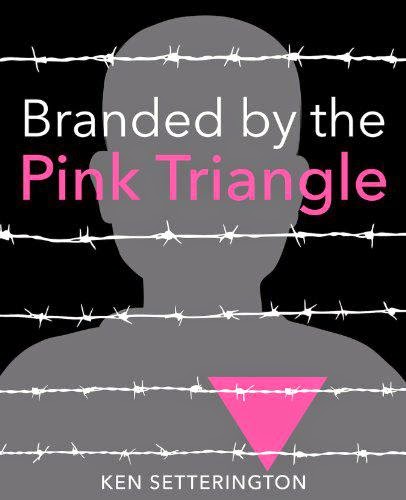 Branded by the Pink Triangle by Ken Setterington tells the story of the Nazi persecution of gay men. Setterington weaves survivors' stories in a chronological history wherein they told about, at first, the harassment they suffered at clubs and bars, to the eventual deportation to concentration camps where all gay men had to wear a pink fabric triangle sewn onto their striped uniform. Branded also deals with the atrocities committed against gay men and the horrific conditions they endured in the concentration camps. This book had been classified by Library and Archives Canada Cataloguing in Publication as juvenile literature. I cannot disagree more with such a classification. In fact, my own library system has six copies of this book, and they are in the adult collection.

I raise a very weighty topic when I argue when is the appropriate time to tell children about the atrocities committed by the Nazis against Jews and gays. Without question, this history cannot be denied and must continue to be told. My reservation is that Setterington has ostensibly written a book for children yet the content within is so graphic I cannot imagine any child reading this on his own and not feeling wholly traumatized afterward. The cover, font size and plentiful illustrations all point to a junior format of a book. In fact, all five of Setterington's other books owned by the Mississauga Library System have been placed in the Children's Department, so I do not feel as if Branded was an exception, but rather that Setterington fully intended for children to read this. However I do wonder about the five pages of endnotes, and why they were in a work of juvenile nonfiction, and thus why Library and Archives Canada felt to classify it as such.

The target audience for such a book is likely not children in general, but rather children of gay fathers. Setterington described Berlin nightlife before the National Socialists came to power, when it was an exciting place for gays to be out and socialize. I found the description of the goings-on at sex clubs to be entirely inappropriate for juvenile literature. Repeated references to acts of "indecency" committed with another man, or of men who allow themselves "to be misused indecently", do not belong in a book for children. The language, where Setterington used such slang terms as "queen" for an effeminate gay man, would be totally lost on a child reader under the age of ten. Just who was Setterington writing this book for? For the child of Perez Hilton? For the son of Brüno?

After the liberation of the concentration camps it is a sad fact that the gay men who were incarcerated were not set free. Since they were sent to the camps for being homosexual, and homosexuality was still a crime in Germany after World War II, gay men had to continue serving their sentences and were transferred to other prisons. It took forty years before any public monument was erected to honour the gay victims of the camps. Before then:

"The gay community was not even allowed to participate in the memorial services held at concentration camps or at war memorials. In 1970 gay activists in Amsterdam arrived at the National War Memorial in Dam Square with a lavender wreath to honor the gay men who had perished. The activists were arrested, and the wreath was removed and denounced as a disgrace."

Setterington ended Branded with updates and photos of all the men he profiled. Sadly there are no more survivors who were branded by the pink triangle, as Rudolf Brazda died in August 2011. The bibliography provided a lengthy list of survivor memoirs which are essential reading for learning about gay history in Europe during World War II.


Find this book in the Mississauga Library System's on-line catalogue
Posted by Craig Rowland at 11:29 AM No comments:

Made by Hand: Searching for Meaning in a Throwaway World by Mark Frauenfelder 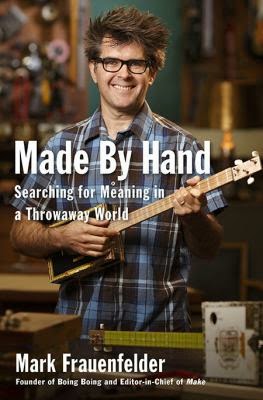 I have had a certain degree of interest in home made projects over the years, bolstered by reading articles on the Boing Boing blog, and occasionally picking up a copy of Make Magazine, amongst other sources.  So it has long been on my radar to read this book by Mark Frauenfelder (a founder and contributor of both of these publications).  It has special relevance for me this summer (July and August 2014) as a children's Librarian preparing for this year's TD Summer Reading Club theme of "Eureka!" - celebrating creativity, discovery, and the maker phenomenon through books and children's programs.


As he describes his forays into gardening, tinkering (hacking) appliances, keeping chickens and bees, preparing fermented and cultured foods, making musical instruments, whittling wood, and tutoring his children, he assesses the impact on his life and the lives of his family members.

Frauenfelder wanted to slow down the pace of his activities - take time to enjoy things, build and modify his possessions to become engaged and to have a stake in the success of his handiwork, to avoid waste, to learn how things work - to take back some control of his life.  It is a deliberate turning away from the consumerist imperative to buy the next newest thing and throw out the old.  "Recreational shopping, it turns out, is no match for recreational making."

For myself, I always feel a deep sense of satisfaction after creating something new, whether it be a newly painted living room, or a hacked Ikea bookshelf, converted into built-in shelves in my daughter's room fit into a triangular space made by a sloping roof.  We have also taken up growing vegetables on our back deck and garden.  I was so happy when I ended up with a bumper crop of jalapeno and cayenne peppers, requiring me to research and explore the cooking possibilities - engaging me in the whole food preparation process - I actually wanted to cook, where normally I see cooking as a necessary chore.  I also regularly enjoy producing art and hobby modelling projects, but I have yet to really tackle a serious maker project like a musical instrument or home brewing beer or something.  This book gives me greater confidence to take on such a project, as it makes it clear that it is OK to make mistakes - it is actually an essential part of the learning process itself.

Find this book in the Mississauga Library System's Online Catalogue.
Posted by James Cooper at 5:52 PM No comments: