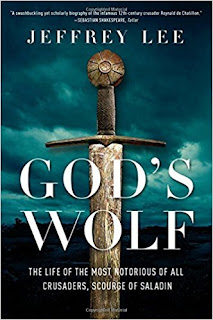 According to the judgment of history, Reynald De Chatillon was a “Bad Guy” of the highest caliber. All opinions in, allies and foes; they all agree. Stories abound of his cruelties. He’s so bad, he could have been buddies with Prince Vlad the Impaler, if only he’d lived three hundred years later.

God’s Wolf, a biography of the Crusader Reynald de Chatillon, is out to prove this abiding opinion wrong.

Author Jeffrey Lee, a journalist with a background in Arabic and Islamic history, takes the 843-year bad reputation of Reynald de Chatillon, knight of the Second Crusade, and turns it on its head.

Granted, Reynald was an upstart. The younger son of a lesser lord in France, he came on crusade to make his career, like many others of his class. And that he did. He married well, and very likely for love. He became the highly effective Prince of the great city of Antioch and the stepfather of the Empress of Byzantium--a marriage alliance that he orchestrated.  Then mid-career, mid-aggression, he was captured and incarcerated as a POW in Aleppo. Nur al-Din held him for fifteen years; one of the longest POW imprisonments of the era.

Upon being released, Reynald learned he had lost everything. His family, possessions, and princely holdings were all gone.  Reynald had to rebuild his reputation as a loyal king’s man, unbowed by years of torture and confinement, and to convince the influential men in Jerusalem that he was still a chivalrous preudhomme.  That he did, for the second time in his life.

Reynald did gain something in the fifteen years he spent jailed in his enemy’s dungeon. He developed a deep knowledge of Muslim habits and horrors. He also gained a capacity for revenge.

Other influential men who had been jailed with him (but not for nearly so long), specifically Raymond, Count of Tripoli, became sympathetic to the Muslim leaders.  Raymond of Tripoli became a traitor to the Crusader cause, sowing doubt and dissension as well as deceptively leading hundreds of men in war, only to turn tail and leave them to their deaths. Raymond was one of the men who was left to tell the enduring stories that colour Reynald in evil shades.

Now, don’t get me wrong. The Crusades were a very dark time in world history, an example of the ills of colonialism at its very worst. And yes, Reynald was cold-blooded and cruel, and his audacious gouges at the heart of Islam still show the scars to this day.  However, the Western view of Reynald’s contributions in this seminal time in world history is strangely negative. This is despite the fact he was not alone in perpetrating these kinds of offenses, and that he was always a king’s man, and that he was true to all the attributes of chivalry, as identified at the time.


Lee writes so engagingly that this book almost reads like a novel. It’s a fascinating polemic that re-examines the primary sources and the biases they reveal. Lee looks at all the facts; from Frankish, Byzantine and Arabic sources; to forge a new opinion on this much-maligned figure from history. And he does it in highly-readable style, incorporating fun references to the films The Manchurian Candidate and Ridley Scott’s historically inaccurate Kingdom Of Heaven. This is a fast-paced read that will provoke and challenge--a great book club choice!

Browse: The World in Bookshops 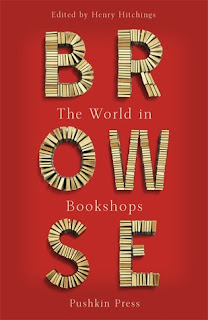 Browse: The World in Bookshops, edited by Henry Hitchings, is a collection of fifteen short reminiscences about the personal significance bookshops had on a diverse assortment of international authors. Half of the stories Hitchings included were not originally written in English, so he employed the work of at least seven translators. My favourite retail space is a bookstore, and specifically a second-hand bookstore. In the introduction Hitchings revealed the hidden secret of second-hand books and the function of their new resting place:"Discarded books are 'repositories of the lives they've been so close to', and a second-hand bookshop is a museum of special moments in those lives."I have read many books about Finland and languages which I no longer intend to keep. If I slipped them into my library's ongoing book sale I wonder what the browsing public might think. There's a nerdy Fennophile linguist in our midst!Juan Gabriel Vásquez wrote about the charm of bookstores: "A good bookshop is a place we go into looking for a book and come out of with one we didn't know existed. That's how the literary conversation gets widened and that's how we push the frontiers of our experience, rebelling against its limits. This is something else online commerce deprives us of: on a website we cannot discover anything, we can't bump into the unexpected book, because an algorithm predicts what we're looking for and leads us--yes, mathematically--only to places we already know."and:"The best bookshops are places where the principle of serendipity, which in broad strokes consists of finding the book you need when you don't yet know you need it, presents itself in all its splendour. A reader's life is, among other things, this tissue of opportune coincidences."I would go one degree further and state, to me personally at least, that Vásquez's remarks are more poignant when referring specifically to second-hand bookstores. Retail establishments that sell new imprints are to some extent predictable. If you want a new book, you will find it there. A second-hand store offers no guarantees what you'll find. The sense of discovery is all the more exciting when you find titles you never thought existed. Such were my experiences shopping at Schoenhof's, a foreign languages bookstore in Cambridge, Massachusetts. While the majority of the stock was in fact new, some of the language-learning materials specifically were old enough to be out of print. When their bricks-and-mortar store was still in existence I would spend hours there literally browsing the languages from A to Z. My blog posts are full of discoveries of spontaneous joys. The store operates only on-line now. My favourite retail establishment remains Helsinki's Akateeminen Kirjakauppa, the largest bookstore in Nordic Europe. Michael Dirda wrote:"As a boy, I could lose myself utterly in a book; now I seem to lose myself only in used bookstores. Alas, neither sweet surrender nor wide-eyed wonder, except fleetingly, is advisable for a professional reviewer. Moreover, I'm one who, even on holiday, can't start an Agatha Christie paperback without a pencil in his hand. My mind tends to interrogate any text, on the alert for clues, telling details, key passages, the secret engines of the story. As a result, while reading remains a pleasure, it's become a guarded pleasure, tinged with suspicion. Quite reliably, however, my heart still leaps with childlike joy at the sight of row after row of old books on shelves."Dirda gets two of my passions down in one paragraph: browsing in used bookstores and always reading in a reviewer's mindset. I will post a review of every book I read, even for books long out of print. Browse was a fast weekend read which will take you back to your fondest bookstore memories.

Find this book in the Mississauga Library System's on-line catalogue
Posted by Craig Rowland at 4:44 PM No comments: 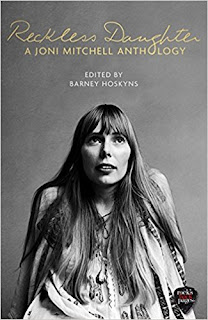 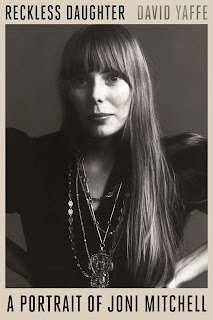 Last year, fans of Joni Mitchell were rejoicing, if a bit confused. Rejoicing, because two books were published about Mitchell's life and work -- and confused, because the books have the same name. Reckless Daughter: A Joni Mitchell Anthology, edited by Barney Hoskyns, pulls together a chronological retrospective on Mitchell's work, told through previously published reviews and feature stories. Reckless Daughter: A Portrait of Joni Mitchell is a personal and musical biography written by David Yaffe. I love and am fascinated by all things Joni, so I tore through both books right away.

The Reckless Daughter anthology is a breezy, fast read. The chronological format lets the reader see Mitchell's career unfold and progress. If you've followed her music throughout her long career, it's an interesting perspective and reminder of the different paths her music as forged. If you're a newer fan or, more likely, jumped in somewhere along the way, it's bound to be enlightening.

As always with anthologies, some of the choices in this collection are surprising. The treatment of Mitchell's music in the music press was sometimes savage and unfair. Critics often wrote about Mitchell's personal life -- or what they imagined they knew of her personal life, based on her lyrics -- and could be blatantly sexist. Little of that is included in Reckless Daughter. So while the book offers an interesting overview, it's also not representative of how Mitchell's music was perceived and written about. Readers may enjoy that, or may find it lacking. I also wondered why Hoskyns didn't include reviews of Mitchell's most acclaimed albums, Blue and Court and Spark. Despite any of this, it's an enjoyable and interesting read.

Several biographies of Joni Mitchell exist, but the latest -- Reckless Daughter: A Portrait of Joni Mitchell -- represents the first time a biographer has had extended access to the artist herself. David Yaffe spent a lot of time with Joni Mitchell over many years. For fans, the opportunity to hear Mitchell's own views on her life and her work are thrilling.

Reckless Daughter is both a personal and a musical biography. Along with the story of Mitchell's life, Yaffe delves deeply into Mitchell's creative process, mining where the songs came from and how they were recorded. The book is packed with fascinating musical details. A famed Steinway piano -- the "Studio C piano" at A&M records -- was the only one Mitchell would play for her masterpiece Blue. Carole King, in the midst of recording her own masterpiece, Tapestry, had to rush in to use the Studio C Steinway before Mitchell's crew arrived. The clock was ticking on one three-hour session, and King recorded "I Feel the Earth Move" in three takes.

Some years earlier, Mitchell and Jimi Hendrix were both performing in Ottawa. In his diary, Hendrix refers to Joni, fantastic girl with heaven words." Hendrix and drummer Mitch Mitchell went see Joni in a small club. They both loved the show, and Hendrix taped it. (The tapes no longer exist.) As it turned out, they were all staying in the same hotel, on the same floor. They spent an evening of deep musical friendship together -- while being hassled by hotel security.

There are also a lot of gossipy bits about Mitchell's relationships, and much analysis and speculation as to back story of various lyrics. In fact, there's a lot of everything. Yaffe has unearthed a huge amount of Joni Mitchell lore, and it's a gold mine for fans.

Yaffe clearly loves and admires Mitchell in every respect. I've read reviews that accuse Yaffe of an uncritical, adoring attitude. For fans like me, who for years have seen Mitchell savaged, misunderstood, and dismissed in an uncomprehending media, the adulation is overdue and very welcome.

Find this book in the Mississauga Library System's online catalogue.
Posted by Unknown at 9:09 AM No comments: