The Radium Girls: The Dark Story of America's Shining Women 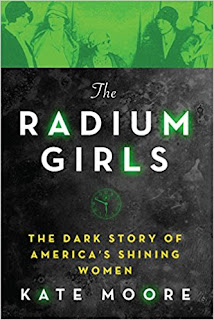 Readers of a certain age might remember clocks and watches with glowing green dials. The dials were painted with radium, the radioactive element discovered by Marie Curie. We had clocks like this when I was growing up. I have a distinct memory of my mother saying, "The women who worked in the factories where these were made got very sick. They had to put the paintbrushes in their mouths, in order to paint the tiny numbers and dots, and they all got sick, and some died."

I never forgot that -- yet I never heard it mentioned anywhere else. Who were those women? Why were they putting a radioactive substance in their mouths? When I saw a review of The Radium Girls: The Dark Story of America's Shining Women, I knew that someone finally had answered those questions. The story of those women was finally told.

And what a story it is.

The young, working-class women in Orange, New Jersey, and Ottawa, Illinois, who painted radium dials thought they had it made. Not only was the pay better than most of work available to women, but they got to work with radium, the exciting glow-in-the-dark substance that everyone was talking about. When one "girl" got sick and died, a doctor ruled the cause of death was syphilis (despite zero evidence and the impossibility of that claim). Another death was ruled pneumonia (also wrong). But as more and more of the workers became sick -- with horrific and inexplicable symptoms -- the pattern became obvious.

When the watch-painting first began, in the late 1920s, the danger of radioactive substances was still largely unknown. Faced with suspicions as multiple workers became sick, the company commissioned a study... then suppressed the findings.

As the women lost their teeth, suffered broken bones, lost their hair, lost pregnancies, became weak, and died, their employers worked overtime at suppressing the truth, denying responsibility, refusing to pay for medical care, and blaming the workers themselves.

If this story was fiction, the companies' actions would be barely credible; readers would say the author laid it on too thick, making the company out to be monsters. Some of the dirty dealings left me gasping. At one point, the women were all seeing the same doctor. They didn't know that the doctor worked for the company. Then it turned out he wasn't even a doctor! Officially, the women died of radium poisoning. But this book leaves no doubt: these workers were murdered.

Labour laws at the time were in their infancy: if a disease wasn't on a short list of specific conditions, workers had no legal recourse. What's more, even those few conditions were subject to a strict statute of limitations -- for which radium poisoning, by definition, would never qualify.

The media and publicity were much different, too. The two factories in two different states, with workers suffering through the same ordeals, were unknown to each other. When the New Jersey cases finally garnered national and international attention, the workers in the Illinois factory realized they were in the same situation. And when the Illinois women took the company to court, the town turned against them. With the country in the grip of the Great Depression, anyone who could supply jobs was welcome. (This itself is a sad and telling commentary about working class life.)

Sick, disabled, and dying, the women were truly on their own. But they fought back, and they didn't give up. Their fight changed the world. Labour laws changed, scientific and medical knowledge were advanced, and precedence was set for greater corporate accountability.

Fans of Hidden Figures and the less famous but equally amazing Glass Universe will want to read this book. If you enjoy hidden histories, stories of struggle and perseverance, and real-life heroes a la Erin Brockovich and Karen Silkwood, this book is for you.

My only criticism of The Radium Girls is the writing itself. It could have used another round of editing to tighten up excessive detail and delete some unprofessional colloquialisms. Whether anyone who is not a writer or editor will notice, I don't know. Any qualms I have about the language are far outweighed by the riveting story. [This review originally appeared on wmtc.]


Find this book in the Mississauga Library System's online catalogue.
Posted by Unknown at 10:13 AM No comments:

The Attention Merchants: The Epic Scramble to Get Inside Our Heads 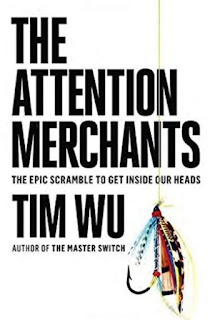 Everywhere we look, every available space is filled with advertising. The Toronto skyline is a sea corporate logos. The due-date receipt from my library book features an ad on the back. I once tracked all the ads shown during a major league baseball game -- during play, not between innings -- and the results were startling, even to me. And, of course, our entire experience on the internet -- especially on our personal mobile devices -- is tracked and used by corporations with only our dimmest awareness and nominal consent.

It wasn't always like this. How did we arrive at this current state? The Attention Merchants: The Epic Scramble to Get Inside Our Heads by Tim Wu answers this question. The answer is fascinating and entertaining, and -- if you dislike the constant and ever-increasing commodification of our lives, as I do -- more than a little frustrating.

In the first part of the book, Wu presents a capsule history of the "attention capture industry" -- what this review in The New York Times adeptly calls "the slow, steady annexation and exploitation of our consciousness". This begins with the first ads to appear in a daily newspaper, moves through snake-oil salesmen, to the first people to recognize the power of radio to sell products, through sponsored television shows, to ads during shows -- which was shocking and provoked outcry in its day! This section is truly fascinating. Wu is a master at finding sparkling details that make the story come alive. For example, I learned that snake oil, now a generic term for worthless products touted as cures for all ills, takes its name from a product that actually involved snakes. The Attention Merchants is packed with these kinds of tasty nuggets of information.

In the history of attention capture, Wu also includes government propaganda. He looks at how, during the first World War, the British government, joined later by its American counterpart, used mass-media lies to entice young men to all but certain death in the trenches. This segment also analyzes the first modern total information campaign, and the first to harness electronic media for large-scale propaganda, that of one Adolph Hitler. We've all seen footage of the giant Nazi rallies with huge fascist insignias, but I didn't fully realize that Hitler, along with Third Reich propaganda master Joseph Goebbels, was the first to study and analyze attention capture, and to use it on a grand scale.

Another interesting segment is devoted to what Wu calls "The Celebrity-Industrial Complex". For someone like me who doesn't share the mainstream obsession with celebrity -- I don't understand it, even a little -- this was both fascinating and affirming. Wu offers an interesting analysis of Oprah Winfrey's attention methods, which he sees as groundbreaking in a not altogether positive way.

The part of The Attention Merchants that has been the focus of most reviews and interviews is about the price we pay for supposedly free services on the internet. Most of us have heard the phrase, "when a service is free, we're not customers, we're the product" or variations thereof. (Various people have made this public statement at various times, dating back to Richard Serra in 1973.) Wu dissects exactly what that means -- for the tremendous potential of the internet, now tremendously debased and squandered, and for ourselves, with our fractured attention spans, short and ever shorter.

In the book's later chapters, the tone and tenor changes from dispassionate historical analysis to passionate and savaging. The rise of "free" social media, where billions of people willingly submit to having their personal habits mined, tracked, and resold for other people's profits, on a scale never before seen in human history, is not a mixed blessing in Wu's worldview. It's a flat-out evil.

By the time I finished the book, I had challenged myself to take a holiday from social media and reclaim my own attention span. Because of certain health issues, I struggle with low concentration, so perhaps the effects are exaggerated for me -- or perhaps not. I want to spend less time with little bits of information scrolling in front of my eyes. When it comes to information, I want quality over quantity.

Wu also points out a massive public pushback, as evidenced by the millions of people willing to pay a monthly fee to enjoy advertising-free viewing through Netflix, HBO, Showtime, and similar services. The cultural phenomenon known as binge-watching is evidence that we can focus our attention for lengthy periods of time, when what we're watching is good enough to warrant it.


Ultimately, the problem was as old as the original proposition of seizing our attention and putting it to uses not our own. It is a scheme that has been revised and renewed with every new technology, which always gains admittance into our lives under the expectation it will improve them -- and improve them it does, until it acquires motivations of its own, which can only grow and grow. As Oxford ethicist James Williams puts it, "Your goals are things like 'spend more time with the kids,' 'learn to play the zither,' 'lose twenty pounds by summer,' 'finish my degree,' etc. Your time is scarce, and you know it. Your technologies, on the other hand, are trying to maximize goals like 'Time on Site,' 'Number of Video Views,' 'Number of Pageviews,' and so on. Hence clickbait, hence auto-playing videos, hence avalanches of notifications. Your time is scarce, and your technologies know it."


"who, having lived and died before the flowering of the attention industry, held that our life experience would ultimately amount to whatever we had paid attention to. At stake, then, is something akin to how one's life is lived. That, if nothing else, ought to compel a greater scrutiny of the countless bargains to which we routinely submit, and even more important, lead us to consider the necessity, at times, of not dealing at all.

I've added Wu's first book, The Master Switch, to my to-read list. [A version of this review appeared on wmtc.]

Find this book in the Mississauga Library System's online catalogue.
Posted by Unknown at 9:54 AM No comments: