Eye Of The Beholder: Johannes Vermeer, Antoni Van Leeuwenhoek And The Reinvention Of Seeing 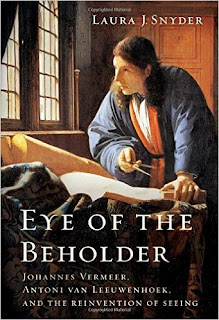 Laura J. Snyder’s book Eye of the Beholder is a work on early modern history but can just as easily be read as an adventure story.  Imagine being the first person to peer into a previously unknown world. Moreover, suppose that this never before seen realm is only touching distance away. It is a thought that when fully grasped and allowed to marinate in juices of possibilities sets the heart beating quicker. Just imagine being surrounded by family, friends and colleagues and not one of them has seen or experienced what you have. I think anyone faced with a similar situation would burn with a chemical hot desire to communicate what had been found. This is what two seventeenth century Dutch luminaries experienced: Vermeer and Leeuwenhoek, the former a painter the latter a natural philosopher. Both men were born in the same year (1632) in an era when science was just beginning to flex its muscles. Each made a discovery and each wanted to communicate this new vision, Vermeer with paintings and Van Leeuwenhoek with letters and reports to fellow natural philosophers.

Eye of the Beholder is set in golden age Netherlands in the 1600s. Vermeer is dabbling with mirrors and lenses and with a contraption called the camera obscura all in an effort to expand the boundaries of his art. These gadgets aided him in seeing the play of light, colour and shadow in new ways. In one painting, Woman in Blue Reading a Letter, Vermeer used many different colours to convey in scrupulous detail shadows cast by the various objects in the room, map, chairs and the like. The actual colour blue is used sparingly on the woman’s outfit. The shadows in the folds of her dress are conveyed with browns and blacks. Our minds supply the blue necessary to complete the dress to see, in other words, what is not there. The woman herself casts no shadow. Leeuwenhoek used the recently invented microscope to make startling discoveries of objects too small for the human eye to observe. Without knowing it he stumbled onto the world of microscopic bacteria. Leeuwenhoek became so enamoured with what he saw, all those strange swirling, floating microbes, that he came to think of them as pets. He mentions in letters to friends missing the tiny creatures living in his vials when he went off on vacation. What is common to Vermeer and Leeuwenhoek is their appropriation of the power of perspective. Each in his own way came to understand the power of learning to see. Snyder does a great job conveying the fascination and joy both men felt about their respective discoveries.

Leeuwenhoek’s story (Vermeer’s also) should be understood against the backdrop of the growing influence of science. There was stern reaction against authority in the seventeen and subsequent centuries. The enlightenment, which had not yet hit its full stride, was taking hold of hearts and minds. The phrase bandied about was “See for yourself,” meaning, don’t rely on others—the so called experts or people in positions of authority—to tell you what is really there, make your own independent determination of the facts of the matter. Leeuwenhoek, a religious man, did not see himself as battling against an established order but as describing something new. It is that near childlike innocence and delight that makes his story so compelling.

I would recommend this book to someone who is interested in the history of science, art and golden age Netherlands. I would also recommend it to anyone who wants to experience what it would be like to be the first to discover something that no one else has seen. The Eye of the Beholder offers readers an opportunity to experience a leap into the unknown.

Find this book in the Mississauga Library System's online catalogue.
Posted by Denis Frias at 1:42 PM No comments: 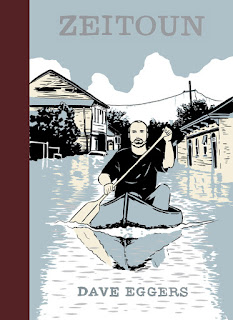 It's almost impossible to write about Zeitoun without spoiling it, and the way in which the story unfolds gives it tremendous power. This book is another of our Library's "Raves and Faves," and I highly recommend it.

Zeitoun is the story of one man's, and one family's, ordeal during and after Hurricane Katrina. It is a story that sits at the intersection of two American nightmares: Katrina and the post-9/11 police state.

It is an answer to every person who feels "police state" and "fascism" are hyperbole when applied to the United States. In truth, that depends on your zip code, your skin colour, and your last name.

Considering I last visited New Orleans in 1992, I have a strangely personal relationship with Hurricane Katrina. August 30, 2005, the day Katrina hit New Orleans, was one of the most momentous days of my life: the day my partner and I moved to Canada. As with any move of this magnitude, we were unplugged from the world - no TV, no internet - for a couple of days before, and at least two days after. When we were back online, I struggled to take in the magnitude of what had happened. No matter how much we read, I felt like I never caught up.

In the 10 years since, in any story about the Katrina disaster, the dates jump out at me. I can picture us clearly, driving The World's Fullest Minivan with our beloved dogs, starting our new life. Right at those moments, tens of thousands of lives were shattered, ruined, or ended.

The Zeitouns' story is compelling, heroic, and deeply frightening. If you've ever been inclined to think, "That wouldn't happen here," or "But they would never do that", know that it did, and they already have.

As with What Is The What, Dave Eggers is using proceeds from this book to fund many very important and worthwhile causes. I highly recommend picking up a copy. [A version of this review was originally published at wmtc.]


Find this book in the Mississauga Library System's online catalogue.
Posted by Unknown at 11:50 AM No comments:

Wild: From Lost to Found on the Pacific Crest Trail 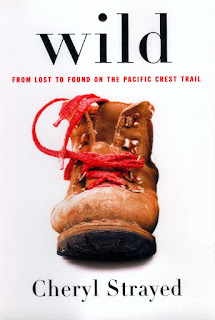 I didn't expect to like Wild. Something about the phrase "best-selling memoir" just turns me off. But when the book was chosen as one of the Mississauga Library System's "Raves and Faves," I was intrigued. Those are always excellent books. (I'm quite proud that all five of my Raves and Faves suggestions made the list!) Wild turned out to be nonfiction that reads like fiction - page-turning suspense, told in a clean, clear writing style.

Wild: From Lost to Found on the Pacific Coast Trail is a story of perseverance and redemption. Her life unhinged, battered by loss and confusion, the author decides to undertake a wilderness backpacking expedition. This is no casual walk in the woods; she's chosen a trail for which experienced backpackers may spend a year in training and research. Strayed is completely inexperienced and almost comically unprepared - comic, that is, if the consequences of failure weren't potentially life-threatening. At several points in the book, I thought, "Well, she must survive, because she wrote this book...".

Wild is suspenseful, moving, sad, uplifting, heartrending, and joyous. I was filled with wonder at this woman's strength, tenacity, and resilience. I was left contemplating that potential in all of us. [A version of this review was originally published on wmtc.]


Find this book in the Mississauga Library System's online catalogue.
Posted by Unknown at 11:42 AM No comments: 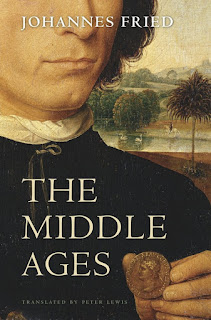 The Middle Ages by Johannes Fried, former professor of medieval history at the University of Frankfurt, was originally published in German and has recently been translated into English by Peter Lewis. The medieval period is a perennially fascinating subject. The mystique of a bygone “Dark Age” accounts for some of the fun in learning about this time in western history. We know, however, that the Middle Ages were not strictly a dark time in Europe. There was a great deal of diligent and intensive scholarly work on a variety of topics including logic and ecclesiastical topics. Tremendous efforts were expended to preserve and carry forward some of the spirit of the Greco-Roman heritage. This effort continued on for a thousand years throughout the early, high and late middle ages. Sure the collapse of the Roman Empire came with its accompaniment of destruction, tears and wailing but the situation ameliorated due in large part to the growth of two stabilising forces: church and crown.

Fried begins his narrative quiet early with the “barbarian” Ostrogoth King Theodoric and the death of Boethius. For those unfamiliar with the story, Boethius was a member of a rich and powerful Roman patrician family. He was considered a highly intelligent man in his day—but the sentiment doesn’t do the man justice. The fact that Boethius was sensitive to the failing standards of excellence in every facet of the disappearing Roman world, and that he tried desperately to fix the situation by translating Greek masterpieces of learning into Latin for future generations makes him extraordinary. Unfortunately, Boethius had only started on this grand and noble project when Theodoric, suspicious of this well connected Roman, had Boethius imprisoned and killed.

From the death of Boethius the story continues on to the relationship between the growing influence of the Papacy and the rising, centralizing power of the Franks. The church and crown dynamic will run through the rest of the Middle Ages and does a lot to define the era.  This great political tango to forge a mutually beneficial relationship between Pope and Emperor (and later, the various monarchs of Europe) is one of those endlessly debated topics in western political-cultural history. Sometimes the relationship was cordial other times it was hostile. For better and for worse the Papacy and the Monarchies needed each other. The political splintering of the Holy Roman Empire and, eventually, the religious splintering ended the uniformity of culture and belief that some have called Christendom.

Fried has organized the book into major chapter headings, not necessarily by date but rather by larger historical currents. For example, in the chapter titled The End of Days Draws Menacingly Close, Fried looks at the idea popular at the time of the imminent end of days. Though the anxieties are discussed the chapter delves much more into cultural transitions in the church, and the growth in ideas of nobility. In another chapter, The True Emperor Is the Pope, Fried discusses the ongoing battle for the hearts and minds of Europeans fought between the papacy and monarchs to determine who would have ultimate power on the continent.  The Epilogue may be the best part of the book in the way it dismantles the whole notion of the Middle Ages as a time of uninterrupted ignorance and superstition.

Fried’s narrative style has flashes of eloquence but not enough of them. What I want from a book on Medieval history, metaphorically speaking, is to walk through a cathedral and witness the play of light on carved stone. Reading Fried’s Middle Ages sometimes felt like I was climbing up a flight of grey, concrete stairs. Not that the language is overly technical or strained, but that it is too conventional: this happened, and then this happened, and the result was that this happened. I don’t want to give the impression that the book is poorly written, it is not, but the experience was not all it could be. The pace and presentation was done with learnedness as the dominant guiding principle rather than the communication of a fascinating period in history. When these two elements coalesce, scholarship and narrative flare, then you get that time-travel magic. If you are looking from a comprehensive and erudite intellectual history of the Middle Ages this is a good one.

Find this book in the Mississauga Library System's on-line catalogue
Posted by Denis Frias at 9:44 AM No comments: