The Real North Korea: Life and Politics in the Failed Stalinist Utopia 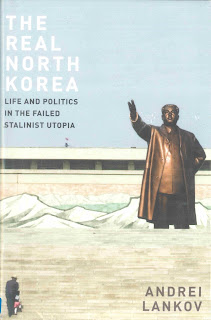 The Real North Korea: Life and Politics in the Failed Stalinist Utopia by Andrei Lankov was written in 2013, two years after the Supreme Leader Marshal Kim Jong Un succeeded his late father, the Dear Leader Comrade General Kim Jong Il. Lankov was a Soviet-era exchange student who studied in Pyongyang and his fluency in Korean endeared him to his teachers and gave him access to the North Korean public. This book was unlike other modern accounts of the DPRK which I have read, in that it painted thoroughly dismal portraits of the future of the North after the inevitable downfall of its totalitarian system of government. I have read--and reviewed--quite a lot about the DPRK already, yet no book went as far in its detailed scenarios about the state of the northern half of the Korean peninsula after the Kim regime collapses. Yet before we get to the future of the DPRK, we have to deal with its past and present, and Lankov kept his history confined to the first chapter. The author thankfully did not bore me to sleep with his Korean War history, as I am prone to doze off when I read war stories. Thus I confess a personal prejudice for war histories in general.

Kim Jong Un inherited a country that is worse off that at any time since the Korean War. The DPRK continues to struggle as a nation punished by sanctions and does not want to see another famine. What can it do to feed its population if its economy cannot provide? The answer, surprisingly, seems to be by not reforming its economy:

"Unfortunately for the common North Koreans, the Pyongyang leaders' unwillingness to emulate China has very rational explanations. North Korean leaders stubbornly resist reform not because they are ideological zealots who blindly believe in the prescriptions of the Juche Idea (they do not, and the idea itself is too nebulous to be a guide to a practical policy anyway) nor because they are ignorant of the outside world. They are neither irrational nor ideological--on the contrary, they are rational to the extreme, being, perhaps, the most perfect bunch of Machiavellians currently in operation. The North Korean leaders do not want reforms because they realize that in the specific conditions produced by the division of their country, such reforms are potentially destabilizing and, if judged from the ruling elite's point of view, constitute the surest way of political (and, perhaps, physical) suicide."

Lankov asserts that any reforms would trigger the end of the Kim regime. Once the population tastes reform, it will demand more. The North Korean elite fears an Arab Spring or a Ceaușescu-style purge if reforms are introduced, therefore no one is willing to implement any kind of change out of fear of losing one's elite privileges. Without a new economy, the North is left on its own, and can only get attention by stirring up trouble. And the DPRK has perfected the art of rocking the boat by blackmailing its enemies and even its few allies:

"Indeed, from the North Korean point of view, it did not merely confirm that blackmail works, but rather confirmed that blackmail works wonders. One could hardly find a better confirmation of the efficiency of Pyongyang's usual tactics--first make a crisis, then escalate tensions, and finally extract payments and concessions for the restoration of the status quo."

The North Korean tactic of issuing nuclear threats then reaping the rewards--all on its own terms--has led some diplomats to say enough is enough. They are calling North Korea's bluff, knowing full well that the North will never launch a nuclear missile against the South or any of the ROK's western allies. To do so would be an act of suicide. The strategy of leaving North Korea alone, letting it rant to an empty room, is new, yet has not proven to be entirely effective, as the North has perfected the art of getting whatever it wants regardless of international pressures. It is much like trying to say no to wailing baby:

"The North Korean regime is thus not going to respond to either pressure or rewards, and this is increasingly obvious to the interested parties. There is therefore a great--and growing--temptation to say that North Korea is better to be forgotten and safely left alone. This is the essence of the 'strategic patience' strategy, which has quietly become the mainstream thinking of the US foreign policy establishment after 2009. In essence it says that the United States is willing to talk to North Korea, and maybe even 'reward' it with some monetary and political concessions, as long as North Korea does what the United States wants it to do--that is, starts dismantling its nuclear program. If it doesn't do so, the United States should, as strategic patience promoters insist, ignore North Korea's antics, since North Korea isn't going to be all that harmful anyway. A somewhat similar attitude seems to be dominant among the South Korean Right. These people believe that aid and political concessions make sense only if North Korean leaders agree to policies that are seen as 'rational' by Seoul.
"This reasoning might be attractive, but it seems to be unrealistic. North Korea has not the slightest desire to be left alone. Indeed, they cannot afford to be left alone. In order to compensate for the innate inefficiency of their economy, they need outside help, delivered on their specific conditions. So far, the best way to squeeze this aid has been to appear dangerous, unpredictable, and irrational. Therefore, they will continue to appear thus, attempting to cause more trouble for those countries and international forces from whom they hope to squeeze some resources. The alternative is not really attractive--either to survive on meager and perhaps diminishing returns of their nonfunctioning economy or to become excessively dependent on just one sponsor (China)."

Lankov believes that the North cannot sustain itself and regime collapse is inevitable. When this will all happen is the question. The author supplied multiple scenarios of reunification, none of which involved a peaceful transition and blending of states. The irony is, as the Korean War falls further into history, more and more South Koreans do not want reunification. They see the costs they will have to bear to support their impoverished countrymen and say no thank-you. The mainland Chinese are worried that regime collapse will send a flood of starving unskilled North Koreans across its border, so they aim to keep the status quo. The international reaction is to leave the North Koreans to lie in their own threadbare bed, yet pretty soon the bedposts will rot and the mattress will fall down. What then? No one wants to deal with this inevitability.

Find this book in the Mississauga Library System's on-line catalogue
Posted by Craig Rowland at 12:28 PM No comments:

The Medici: Power, Money and Ambition in the Italian Renaissance 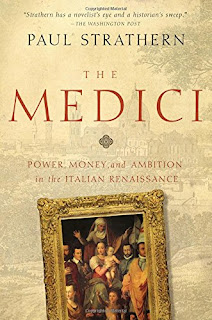 Insanely rich bankers and investors, Popes (and not always good Popes), champions of humanism, Godfathers to the rich and powerful, supreme diplomats, facilitators for some of the brave early practitioners of experimental science, extravagant patrons of the arts, and experts at marrying into royal dynasties. The Medici clan were, if nothing else, an extremely busy household. From humble beginnings (the first recorded mention of the family occurred around the year 1230) in the hills and valleys near Florence to the very pinnacle of power in the Italian peninsula and beyond the Medici are, and have been for generations, a fascination to everyone interested in Renaissance history.

Not all but many members of the Medici family had unquenchable ambition. They were smart, that’s for sure. Their ancestors started off as money changers probably hauling around a little cart in the local piazza exchanging florins for lira or scudo (all kinds of different coins were in use at the time). This is nothing revolutionary. Lots of families were doing similar work. But like I said the Medici had ambition---and smarts. With mathematical principles as their tools (maybe “weapons” would be a better analogy) they figured out how to exchange their coins for higher profits. Then they turned their efforts towards making money lending at interest (they even managed to maneuver around the delicate religious prohibition against usury—the history of this concept is interesting in its own right and worth researching). From there they became shrewd investors with an eye for quality. They bribed the right people (you never want to bride the wrong people, it’s just not profitable) and eventually got themselves the coveted title of “Bankers to the Pope.” Money just seemed to come looking for them at that point.

The Medici were a lot of things but they were not nobles. The nobility have never liked upstarts (not much has changed in this regard). To break through that barrier (again ambition and smarts) they doled out florin like animal balloons at a carnival. Oh the parties! Nobody schmoozed like the Medic schmoozed. Fast forward three generations and you find Medici blood in French, Spanish, and Germanic royal families. Cosimo and Lorenzo were smiling in their graves.

As you and I know the good times don’t last, they never, ever do. How does one describe what was lost to the Medici over time? I want to say “vitality” but that doesn’t capture it. The “spirit of ambition” comes closer but is still lacking; there was plenty of luck and serendipity in what they managed to accomplish. It seemed Fortuna’s gifts were whittled away with each passing generation. The family just didn’t have it anymore. Read the chapters on Cosimo de’ Medici and then read the chapters describing the life and times of Gian Gastone de’ Medici and you will understand what I mean.

The rise and fall of this awesome family is captured brilliantly by Paul Strathern. His historical biography of the family has a great narrative arc. The final chapter left me with a sense of melancholy as though with the passing away of Anna Maria Luisa the world had lost something special. And it did.

One last bit of business. You should know this book is more than a biography of the various Medici family members. You could read the book and walk away with a rich understanding (and appreciation) for the Italian Renaissance as an important historical era in the development of western civilization.  The big artists of the time, and individuals like Galileo Galilei and Savonarola, all make appearances in the story. All in all a great read.

Find this book in the Mississauga Library System's online catalogue
Posted by Denis Frias at 7:52 AM No comments: