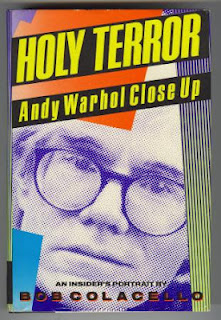 I have been a fan of Andy Warhol longer than I have been a fan of the Beatles. As a pre-teen I decorated my closet door in my old room with Warhol photos and art. After I had "discovered" the Beatles in the spring of 1980 I learned more about their lives and grew fascinated by the early films of Yoko Ono. She would later work with John Lennon and he himself produced his own experimental films. Although I never owned a camera I was fascinated by the idea of filmmaking. In the sixties Warhol produced dozens of his own underground films and I was more interested in his work than I was in Ono's.


Find this book in the Mississauga Library System's on-line catalogue
Posted by Craig Rowland at 10:38 AM